After completing my nightshift on Monday morning and catching a quick nap, I went to collect Shanshan & Nicole from Beijing's old International Airport with Emily. Once the new arrivals got settled, Emily Tours took us for a stroll round Hou/Qianhai Lake (where I also had dinner with Atos Origin a couple of days earlier). Actually it is right next to a world renowned sports school. Once we got sufficiently starved, our culinary guide took us to the magnificent Beijing DaDong Roast Duck Restaurant at No. 3 Dongsishitiao, Doncheng District. The long wait well worth the most tasty and well presented Beijing duck, tongue, hart, liver, wild mushrooms and bamboo shoots I ever ate, accompagnied with a Yianxing beer from the City. Before diving in our beds, Emily drove us through the Tienanmen night scenery. 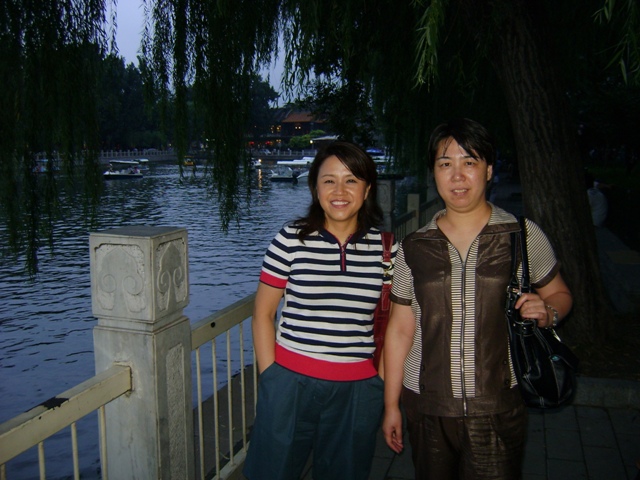 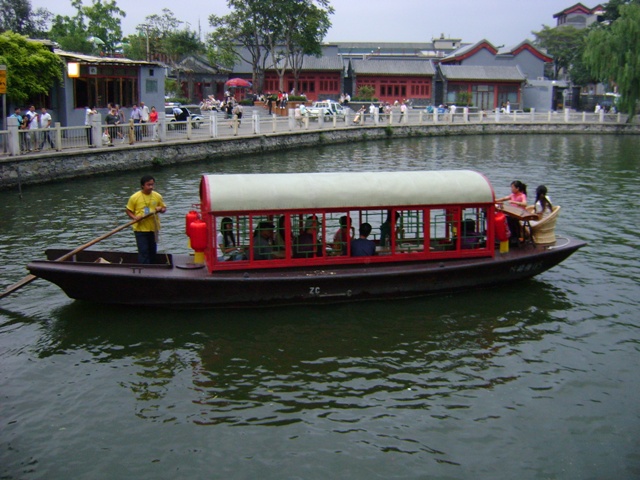 Eat while afloat and listening to zither music 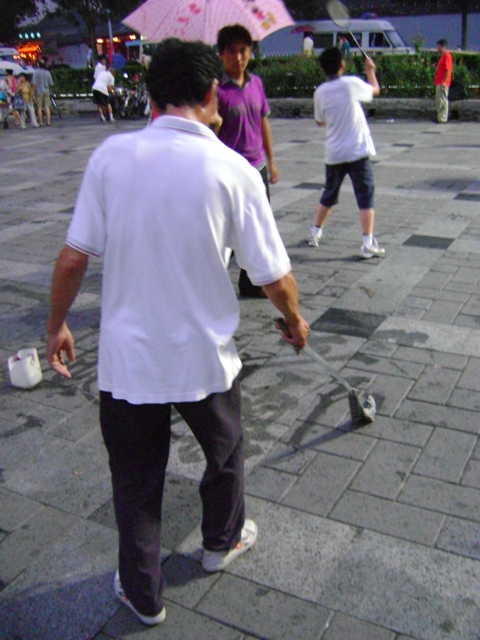 Water calligraphy in the rain 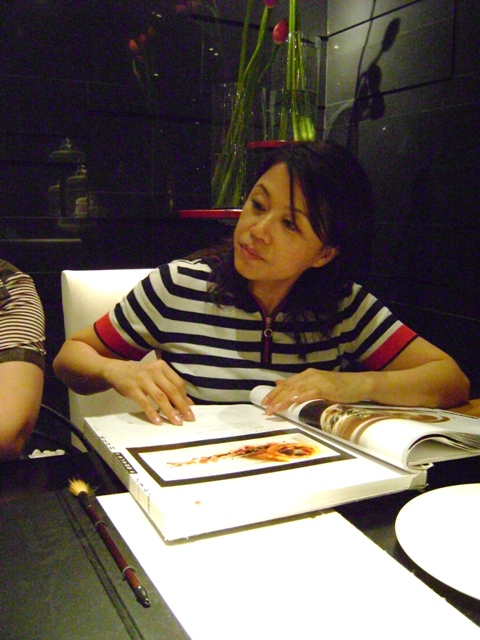 The day after we started with baozi breakfast at the Eastern Plaza foodcourt (Dongdan on underground Line 1) with Xiao Mei and Vickie. That fueled us enough to venture on Tienanmen and enter the Forbidden City - no adequate words to describe this venue, just go and discover for yourself - and got out at the backdoor leading on Jingshan Qianjie. Before going to Olympic Parc for the evening, we paid a visit to one of Shanshan's other university classmates. He is now lecturing journalist courses in Hong Kong university, and his parents - his father used to be China's minister of Minister Timber & Forests - now live in a nice appartement within a well guarded and accomodated gated community. 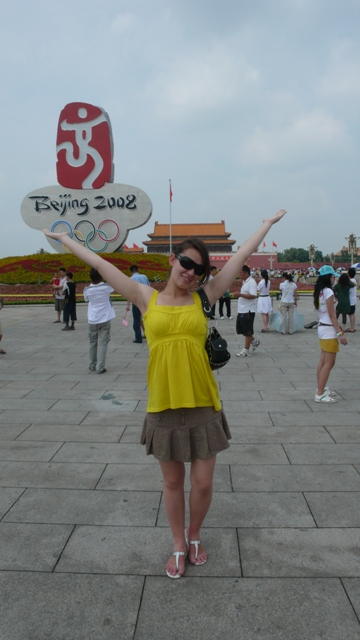 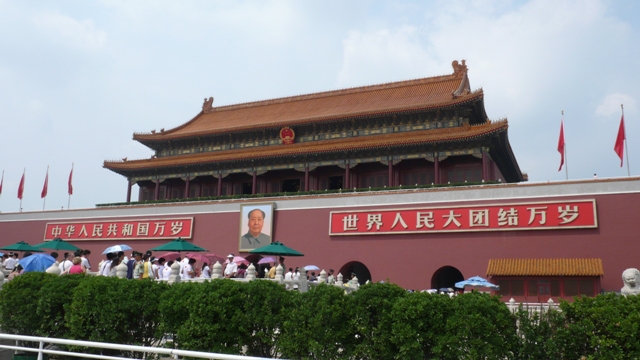 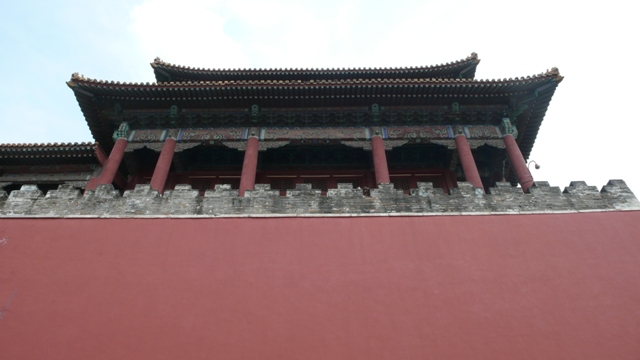 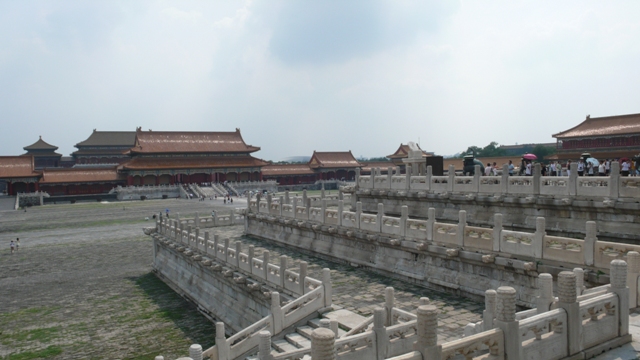 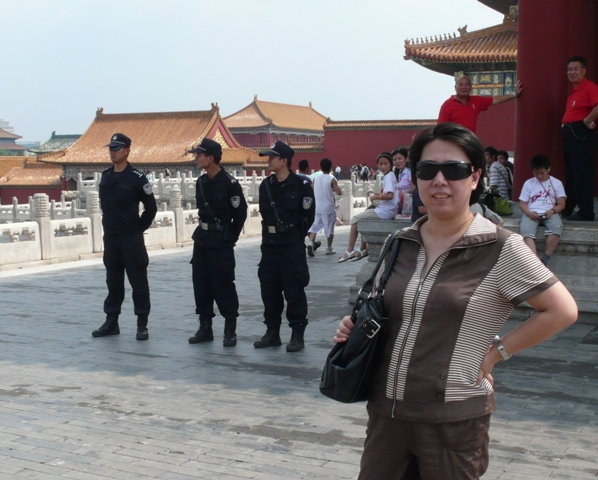 Members of China's elite force, well trained in man2man combat using Kungfu. The same soldiers have been guarding the flame during the torch relay (a.k.a. "the men in blue"). 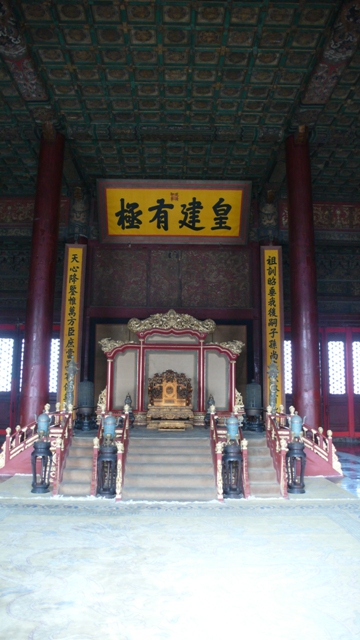 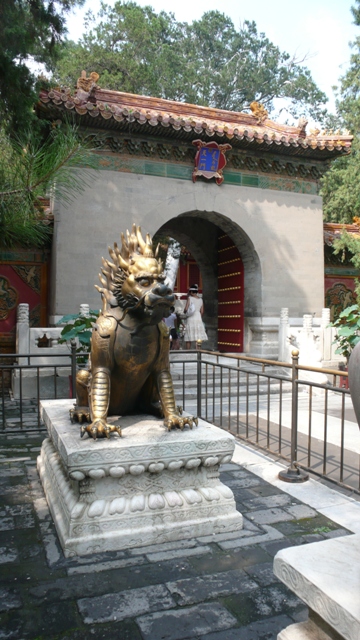 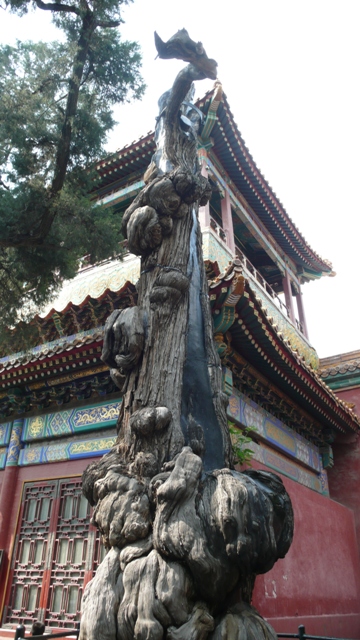 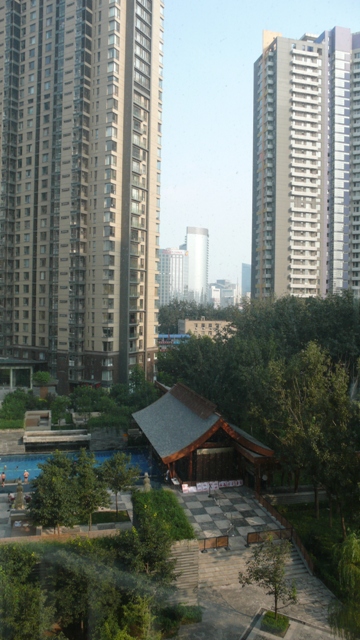 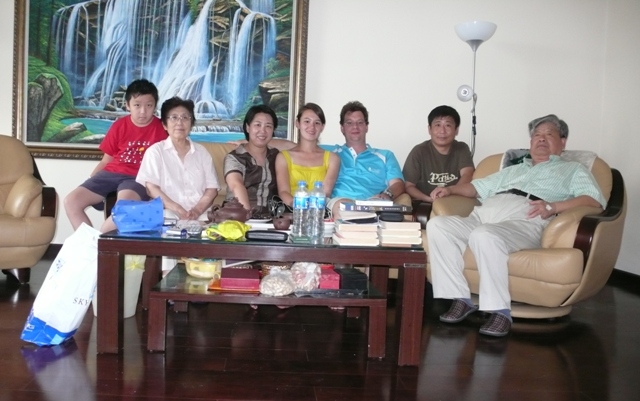 For the evening I gave my allocation of 2 tickets to Shanshan & Nicole for the semi- and finals Sabre in Fencing Hall. Since they had to enter seperately via the spectators gates, we lost track of each other, but afterwards they reported it was a great lifetime experience. Zhong Man (China) beated Julien Pillet (France) to face Nicolas Lopez (France) who just defeated Mihai Covaliu (Romania). The crowds never gave the poor Frenchman a chance, as they went ballistic cheering their unexpected champion. He received his Gold Olympic Medal out of the hand of His Royal Highness Grand Duke Henri Albert Gabriel Félix Marie Guillaume of Luxembourg, while the crowds - including my opportunistic daughter & wife - where cheering the "March of the Volunteers" (China's national anthem). Anyway I saw the French Team on their way out, and they seem to take in their loss quite sportively. 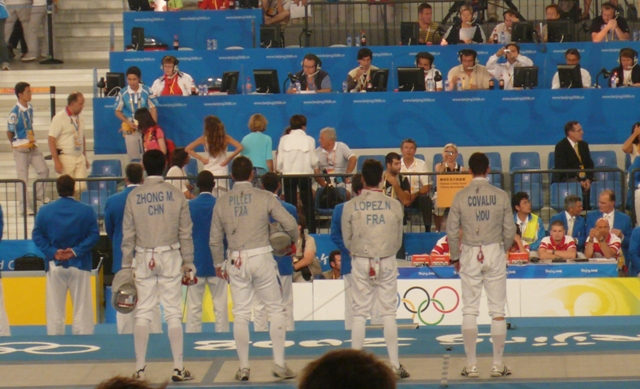 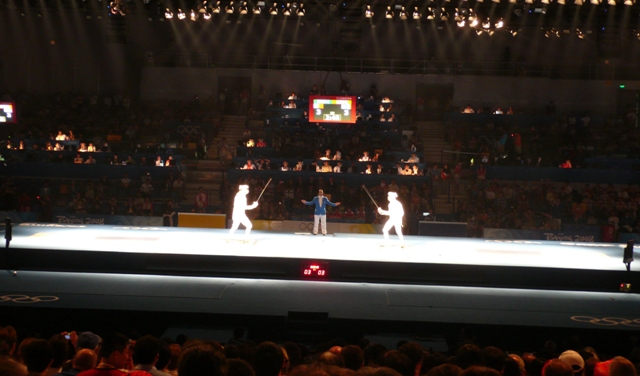 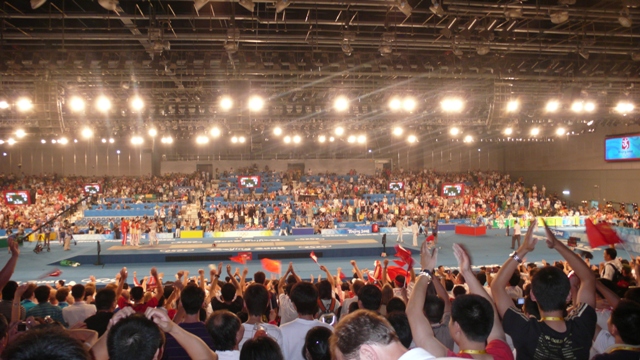 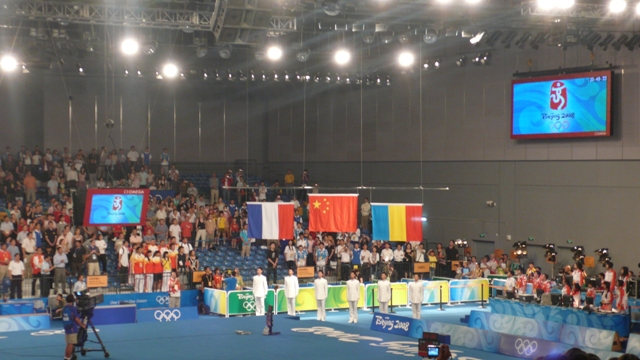 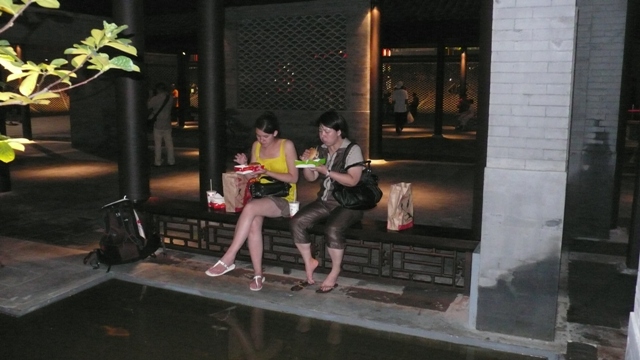 Devouring our McDonald's burger in the Sunken Garden 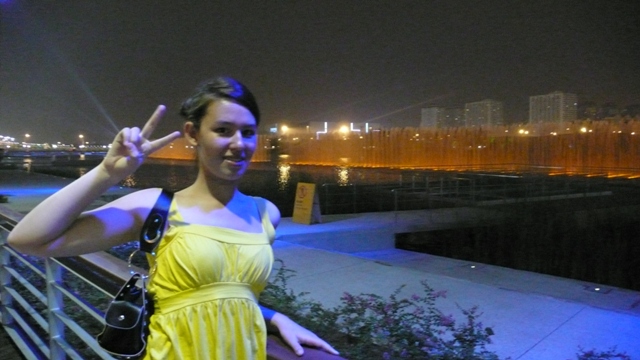 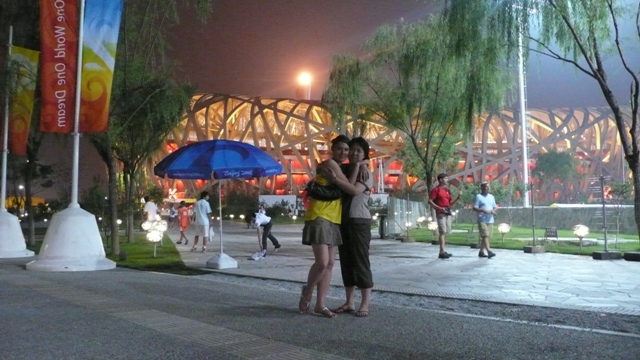 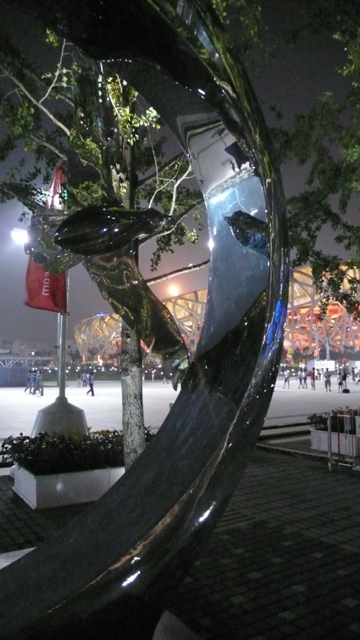 Olympic flame seen from the other side of National Stadium 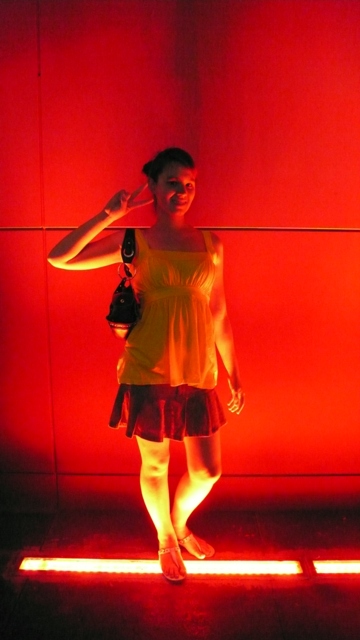 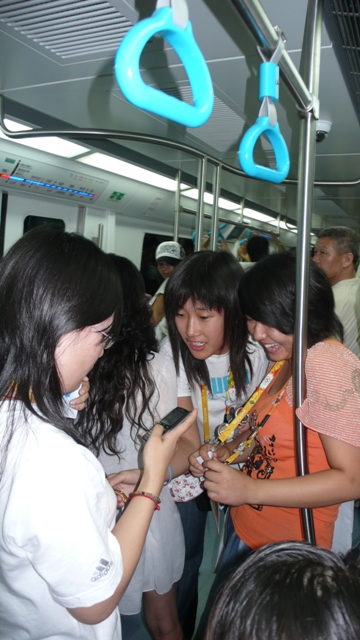 Volunteer pin trading in the subway

Outside I was enjoying rock & roll from SMU and Bridgeman at the Samsung stage - both violently waving Chinese banners - while I discoved on the INFO terminals that Evi Van Acker was leading in the first 2 Laser (Radial) races of the competion ... Evi Jia You (give gaz) !!!