Karaoke with the 3 S'hai Sisters

Neither unnecessary nor unrequested changes are allowed during Games Operations, so while closely monitoring suspicious or unexpected system activity - in between responding to issues - it becomes gradually possible to take in the sheer size of the Olympiad. After a while it makes you feel tiny like an ant, akin to the sensation one must feel on an aircraft carrier or inside a space colony. Unlike a metropolis, this Olympic constellation serves the single purpose of hosting the Games running a little over two weeks (of course followed by the Paralympics in September), while some of hostesses during the Opening Ceremony have been selected for years, and exercised for more then six months just to put on the perfect smile. Some of the athetes in niche sport categories such as weightlifting or archery only receive due coverage every four years, for which each has been trained and coached to the extreme.

Far more relaxed are our encounters with all of Shanshan's friends in Beijing. Wednesday evening we enjoyed great Chinese fondue with Shanshan's former collegue roommate and her friendly husband. New to me were boiled pigbrains and coagulated duck blood, which surprisingly tasted very nice. Everyone dips his or her own cold meat and vegetables with chopsticks or leaking spoons into boiling water with either fish or mushroom flavour, turning this kind of dining experience into a very social event. Usually this type of spicy and steamy food was especially reserved for winter, but the omnipresence of airco allows consumption in Summer as well. At the end of our meal, extremely long fresh noodles - to boil in the remaining stock - where made for us on the spot by a cool guy doing his table performance.

Directions to the Haidilaohuoguo restaurant 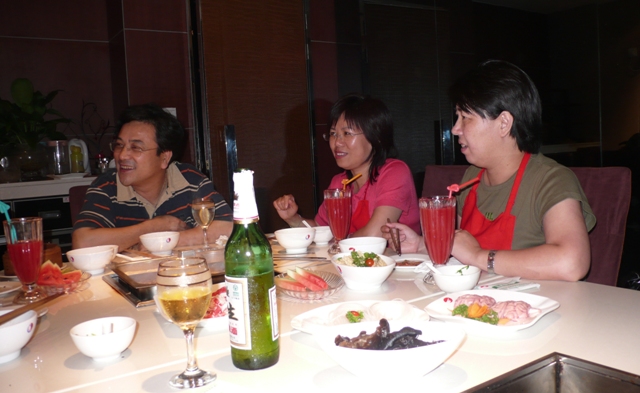 Chatting the night away. Visiting China and friends equals eating for hours in a row, reaching an absolute climax during Chinese Lunar New Year in Winter. 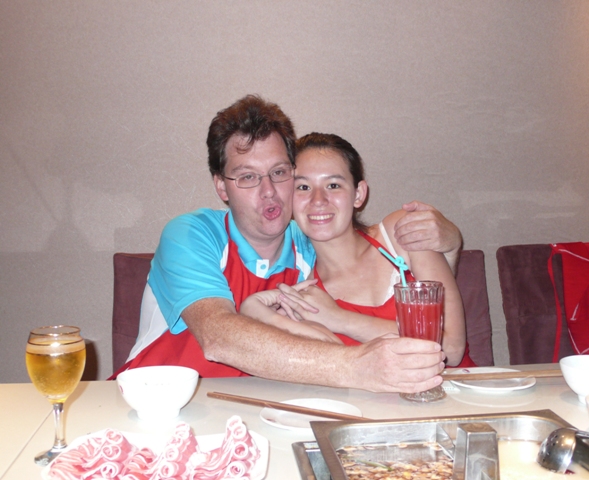 My daughter Nicole and I are not exactly the most well behaved dining guests you might expect. 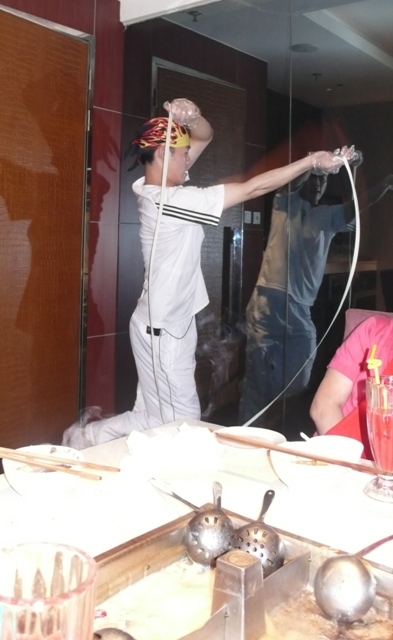 Over lunch during day shift I had a very nice talk with Lijun Peng now living in the Netherlands and working in Atos Origin Eindhoven, about the many misconceptions that exist in the West about the People's Republic of China. Some things are pertinently true, like the heavy pollution, uncontrolled production, a unhealthy rate of traffic accidents and compressed population, though predominantly in the coastal areas. Government control however is no longer as intrusive as we expect it to be. Mostly the Beijing central government focusses on a couple of key points, which are then not debated or contested in public, and certainly not in or with the press. Nevertheless everything can be tabled comfortably within the confinement of family or friends, which explains why private restaurant, karaoke or tea lounges are so popular. Another issue apparently irking many Chinese, is typical behaviour displayed by some American or European visitors, which is perceived by them as being extremely ignorant or arrogant. Normally anything being different is gladly accepted, as long as it is not denigrating or personally offending. However the overzealous respect shown towards foreign nationals - combined with the huge gap in mutual understanding - often leads to misjudged complacency of the latter. Indeed some of the remarks I sometimes overhear would certainly not be tolerated elsewhere, and unfortunately they are only met with a deep and silent grudge, whereas a frank response might actually be more suitable to put relations in the proper perspective again.

Since I had a 24 hour gap between day and night shift, Emily invited me, Nicole and Shanshan to meet her friend Christine Zheng over - guess what - dinner. As it turned out, all three ladies - Shanshan, Emily and Christine - where from Shanghai, and invariably completely nuts too, so the loud shouting and laughter eruped in the local Wu dialect - unintelligible to all other Chinese - for the rest of the evening. Most S'hainese don't feel much at ease in Beijing, but this threesome is the exception to confirm the rule. Christine Zheng and her Irish husband are also the owners of the Pavillion opposite the West Gate of the Workers Stadium on Gongtixi Lu, Choayang District, Beijing, and one of the nicest bars in Beijing according to Emily, who is their friend and legal council. However they were forced to close for two months due to government Olympic security concerns, so she was leaving the day after for a well deserved holiday in London and Spain. Besides ordering Beijing Roast Duck, they could not resist ordering some traditional S'hai dishes, such as the small eel in oyster sauce, marinated fishtails and fried sugary apple to dip in cold water as a desert.

Afterwards my expectaction was to visit a traditional tea house, however everyone seemed to be up for karaoke. Ever since loud singing erupting from the traditional hotel's karaoke lounge, thus violating an otherwise perfect contemplative night in Lijiang (Yunnan province) facing the stary skies and the Himalaya in the North, I got mixed feelings towards this pastime, but I decided to open up my mind - and mouth - nevertheless. Since many years this this Japanese phenomenon has taken China by storm, and businessmen are even practicing during the day to impress their Customers (and mistresses). Generally speaking there is the family fun and the seedy kind, undistinguishable in style, except that rooms in the latter can be locked from the inside, and have no window in the door (for obvious reasons). While the Chinese party gave away traditional folk and modern pop songs, Nicole and I created a medley of The Who, Rod Steward, David Bowie, Disney Songs, the Animals, ABBA and The Village People, but I fear I might have lost everyone with Guns N' Roses (including myself). 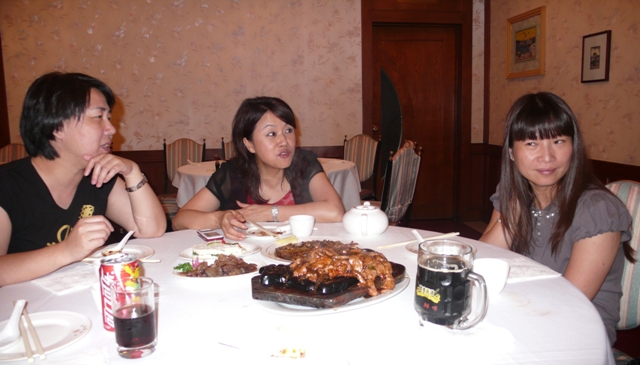 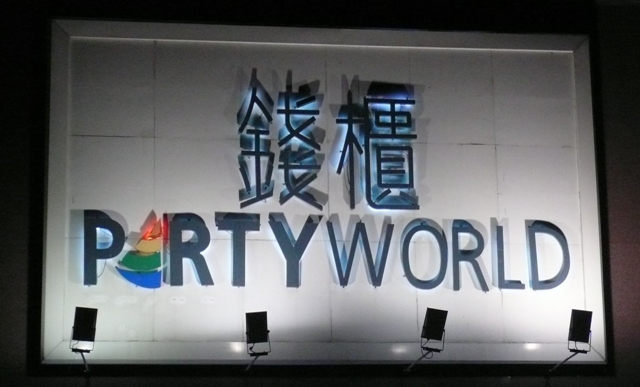 The Family Type of Karaoke Club 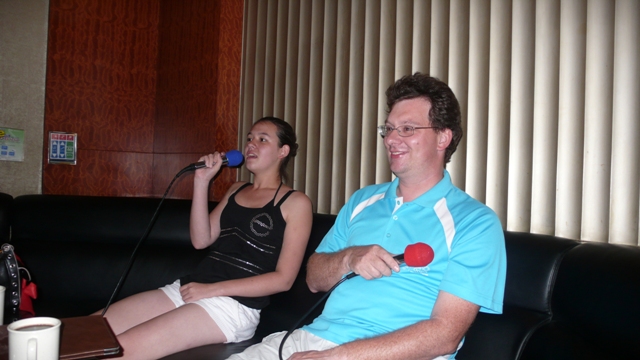 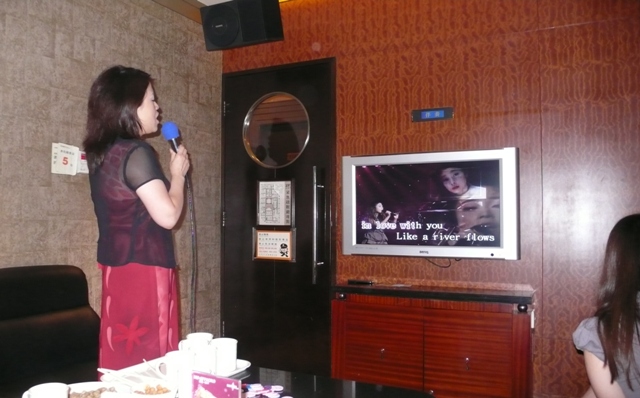 Meanwhile after a smooth start Evi seems to be falling behind in her Laser Radial category:

All sailing races these days are constantly rescheduled due to bad weather. Sebbe and Carolijn finished 11th in the first Tornado race on Friday.

In Beach Volleyball Liesbeth Mouha and Liesbet Van Breedam defeated Georgia in the Women's Lucky Loser on Thursday, but they lost from the USA in Round of 16. In rowing Men's Double Sculls, Bart Poelvoorde and Christophe Raes are ranking a nice second in Final B held in the Sunyi Olympic Rowing-Canoeing Park. Meanwhile China is piling up 38 medals (24 Gold) against 44 for the USA (14 Gold).

According to BOIC, our Belgian volunteers got a chance for a meet & greet with Tia - we invited her to the Technology Operation Center - but for now everything is focussed on the competition.