Last night a lost bat was flying the whole shift inside the Technology Operations Center, and the central displays showed more and more grey of Olympic venues being decommissioned. We also passed the cape of 100k requests and incidents (almost all related to normal operations of the Games). In between work - well ... watching monitoring screens - my Spanish Duty Manager and Dimitri from the Security Team smuggled me inside the IBC (Internation Broadcast Centre) for a visit and decent food (only single thing to complain - no fault of Atos Origin - is that the food served to the operational staff in the cantines would even cause pigs to loose their appetite). 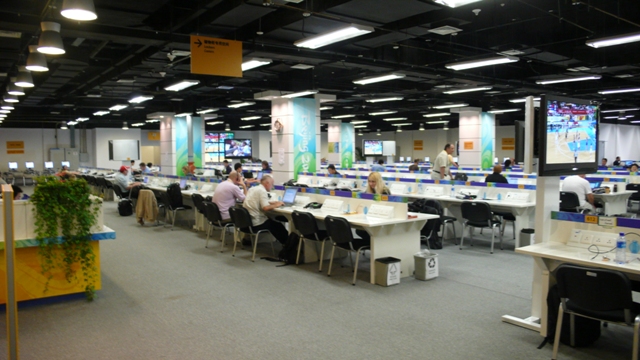 Workroom of the written press. 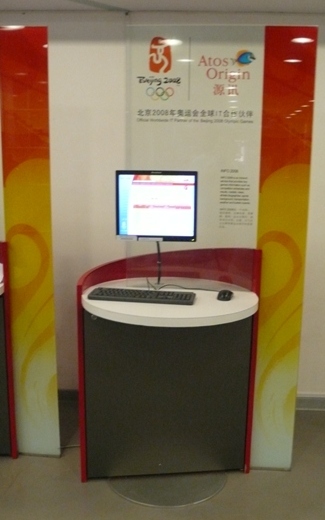 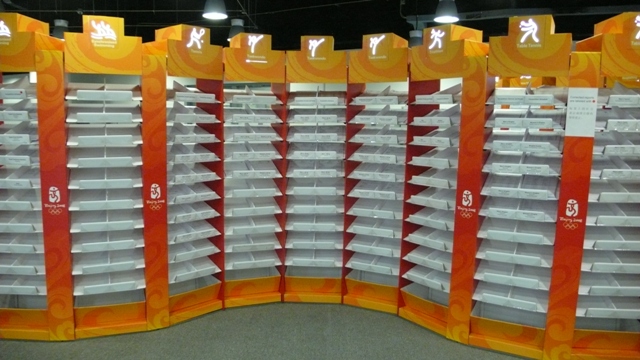 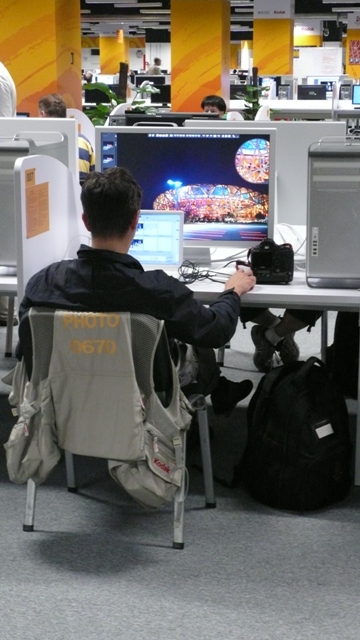 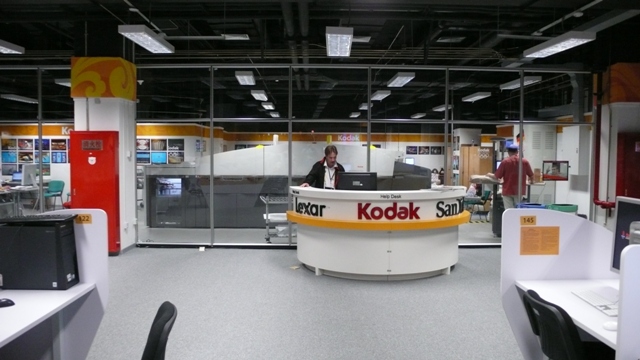 Since I couldn't immediately crash in my bed when returning in the morning - as my hotel room was being cleaned - I decided to try out Emily's small bike for the first time. I wasn't disappointed for persisting on my bike idea, as Beijing suddenly grew bigger than the hotel, the subway and the Olympic venue. However when I tried to cycle back through one of the two heavily guarded security gates of our hotel, the entiry staff stood around me and got all excited. Remembering the "Kitchen Knive Story" (see earlier in the blog) I feared for the worst, i.e. confiscation of my new ride. After a while someone finally gave me an innocent business-like card, reading: 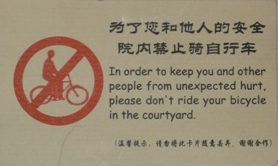 Slept well until 5 o'clock in the afternoon, and took an easy stroll back to work. Bought some steamed buns as evening-breakfast, which I ate while walking. Moving through Beijing, you really got a feeling being part of a metropolis, a feeling I often experienced when living in Londen, and what I actually miss quite a lot in my home-town Brussels. From Beitucheng I walked North over Beichenlu and entered the OCD (Olympic Ground Common Domain) via the principal Southern spectators gate. Once on holy Olympic territory, I was spoiled with one of the most beautiful sights I ever set my eyes upon. Walking North on the axis running straight as a meridian through Beijing, at my left (West) the sunset caused the horizon to be on fire, in sharp contrast with the Pan Gu hotel and its gigantic billboards. Another contrast was the Bird's Nest on the right (East) emanating its artifical red glow. No way I can capture this in a picture, so everyone will have to take this for granted.

During the night shift contemplating the rising moon behind the NST, I could not but reflecting on a Tang poem from Li Bai which I tried to memorise many years ago. This though drew me away from behind my PC into the dark OCD, desolate with the exception of silent guards positioned as pawns protecting the venues. So I took up some absolute beginner pencil drawing of the various artefacts in the park, when at 4 o'clock classic tunes, voices and clapping of hundreds of invisible people - probably preparing for the Closing Ceremony on Sunday - resonating from within the Bird's Nest. The message conveyed by this architectural masterpiece became extra clear under the bright moon: A gigantic cocoon harbouring a fragile but united world. After a couple of weeks many foreign visitors turn numb, paranoid and edgy, however this stay for me I found China more inspiring and enlightening that ever. Obviously politically and socially a lot can be criticised and improved, but this shouldn't cloud all positive experience. As I return to DHQ for the last hours of my last olympic working day/night, the solar-powered lanterns along the lane automatically switched themselves off one-by-one with the sense of the bleak morninglight.

chuáng qián míng yuè guāng, yí shì dì shàng shuāng. jǔ tóu wàng míng yuè, dī tóu sī gù xiāng. Before my bed - There is bright-lit moonlight, So that it seems - Like frost on the ground. Lifting my head - I watch the bright moon, Lowering my head - I dream that I'm home. Li Bai or Li Po (李白) (701-762) was a Chinese poet. He was part of the group of Chinese scholars called the "Eight Immortals of the Wine Cup" and along with Du Fu he is often regarded as one of the two greatest poets in China's literary history. Click here to play or download voice recording of Chinese collegue and Data Center Duty Manager sitting next to me in the TOC. 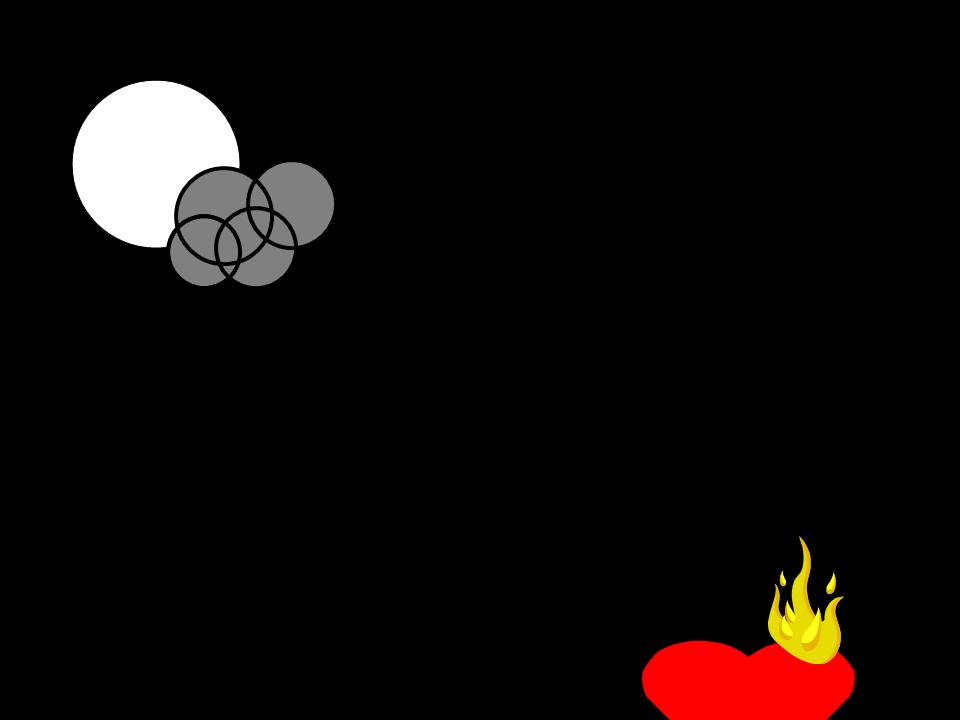