Since I passed on my allocation of 2 tickets to my wife and daughter, who saw China win the Sabre contest, normally I no longer had a chance to watch any contest. However I got a nice ticket out of a lucky draw for Athletics, featuring our Company Champion Tia Hellebaut on Thursday morning.

Personally I didn't start all that well, because I was on night shift, hardly slept, it was raining cats & dogs (humidity of 90% according to the INFO intranet) and traffic got chockablock, even though all cars with even license plate - basically half of the fleet - were not allowed on the Beijing city roads (today being an odd day). Fearing to be late for the kick-off, I waded through ankle deep water and the security check for Olympic Green (luckily I was wearing my Gore-Tex jacket and waterproof sandals). Because of the weather the competition got delayed, so I still had time to buy all sorts of snacks to substitute for breakfast.

The competition was a pleasant surprise, as there was a lot going on:

The Walk was won by Olga Kaniskina from Russia, and the best Javelin throws were performed in group B by Ilya Korotkov (Russia) with 83m33 and Vadims Vasilevskis (Latvia) with 83m51. After a while I spotted Tia preparing in full focus near a Dannish flag, obviously being the most beautiful athlete on the court. The proceedings from the High Jump were a bit hard to follow, as only scores for Decathlon and Javelin appeared on the Omega scoreboards, but Tia flied almost effortlessly. The following athetes qualified with her in Group B: Ariane Friedrich (Germany), Vita Palamar (Ukraine), Svetlana Shkolina (Russia), Anna Chicherova (Russia), Romana Dubnova (Czech Republic). The crowd's favorite Zheng Xingjuan from China got stopped at 1m89.

At noon I decided to walk around to enjoy Bird's Nest, and especially to get a good view on the Olympic torch. A friendly volunteer gave me clearance to the lowest level, so I suddenly had an opportunity to follow the Belgians up close for the Shot Put in the Decathlon. All around me snobbish looking people only seemed to be interested in talking, taking pictures with me and my Belgian flag/cap and trying to trade pins (some volunteers are like walking chrismas trees). The Security Guard put everything in order, so was able to follow the game. Finally in this discipline Hans van Alphen with number 1115 ranked 11th with 14m86 and Frederic Xhonneux with number 1122 ended 18 (last) with 13m99. Alexander Pogorelov was the winner with 16m53. Apparently both Hans and Frédéric Xhonneux had to abondon the competition afterwards due to an injury.

After this I really decided to call it a day, returned to the hotel, bought some steamed baozhi and backed jiaozhi (my favorite) and catched the single hour of sleep I would have in 24 hours. Normally I was plannning to buy tickets for the Wushu tournament on Friday (the IOC did not accept Kung Fu as an official Olympic discipline, but the Olympic Sport Center Stadium was allowed to host the event anyway). However I am so dead tired that Friday during the day I really plan to sleep like a horse to prepare for my last Olympic night shift. 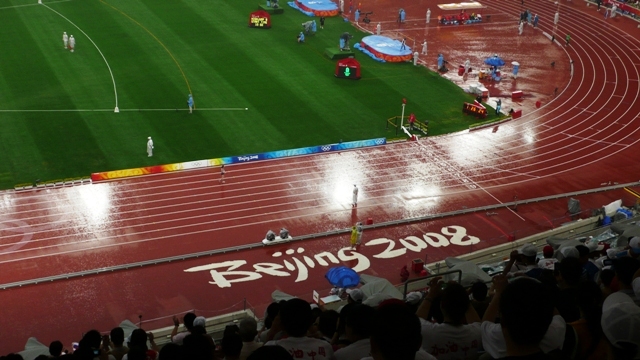 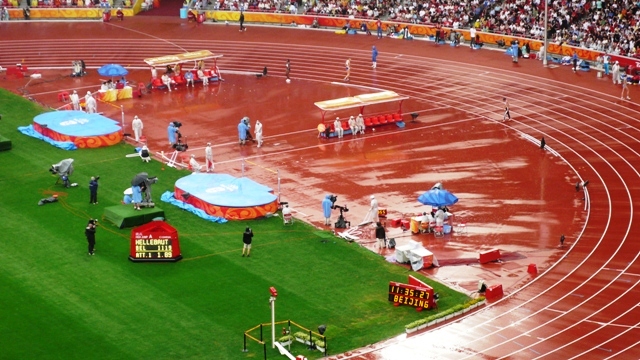 On moments like this you wish your camera was equiped with a telelens. Anyway from the scoreboard you can read it's Tia all right. 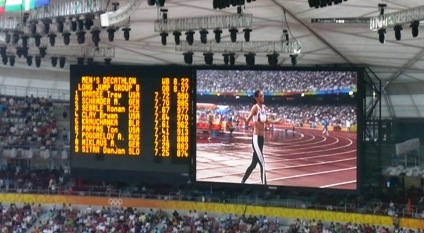 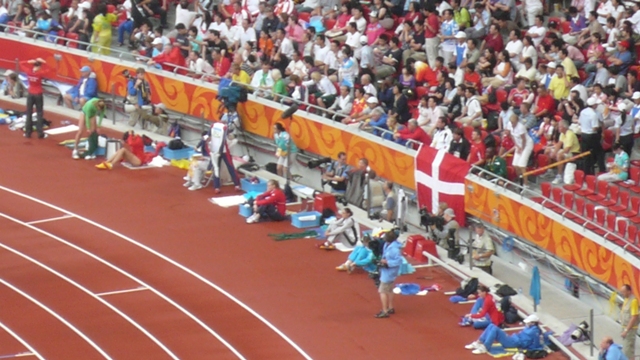 Tia fully focussed. Thanks to the Dannish flag I could always trace her back from 150 metres distance. 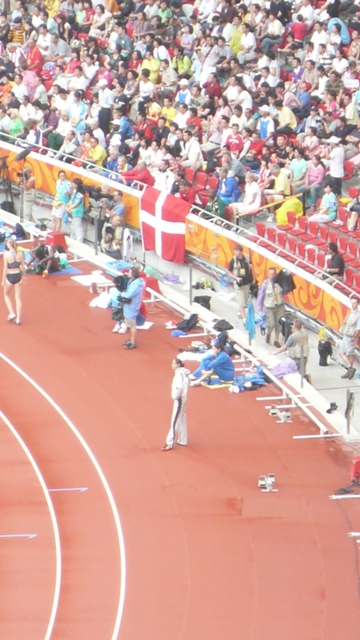 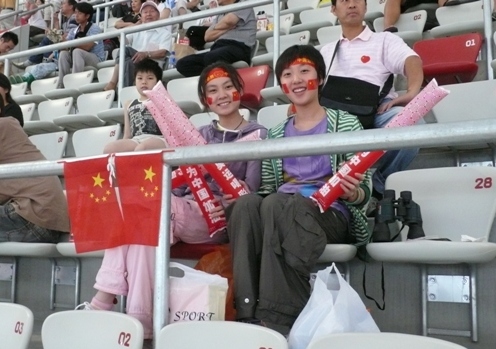 Tried to convince numerous Chinese supports to cheer for Tia and Bilishi, but can only get them excited with "Zhongguo Jia You !!!" 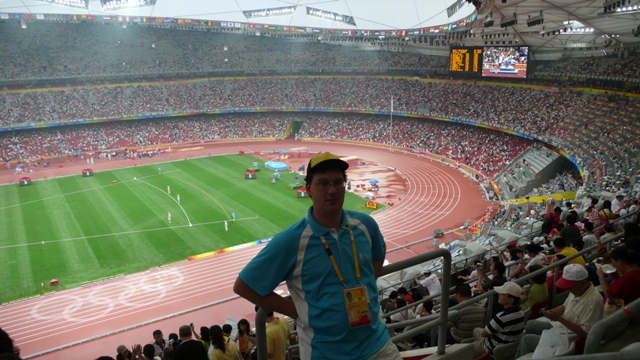 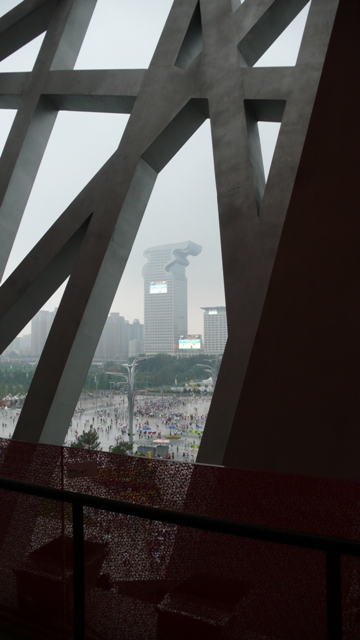 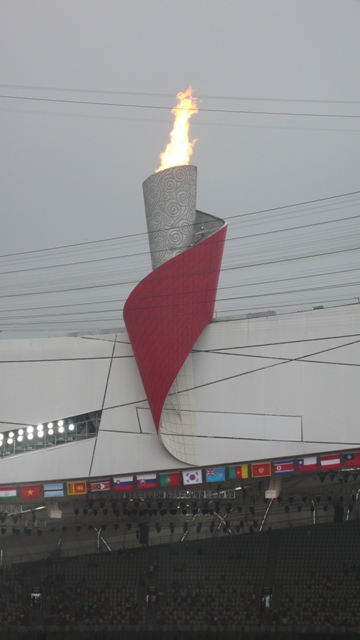 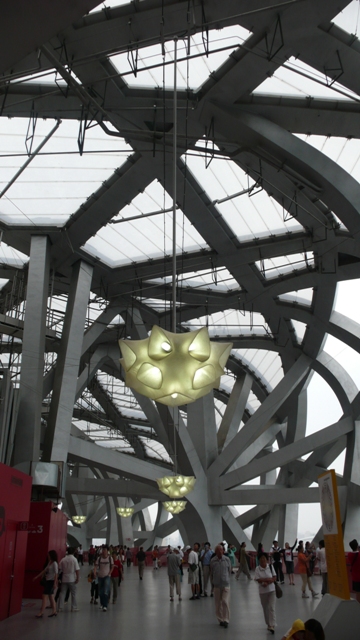 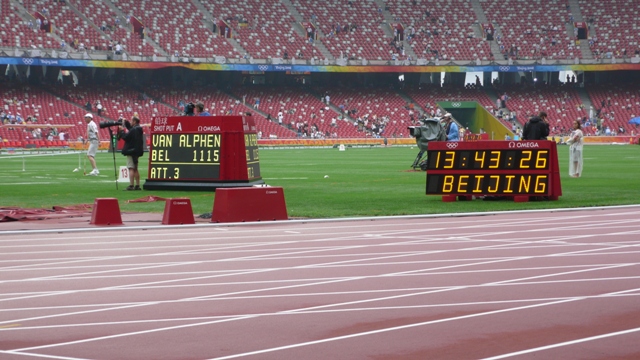 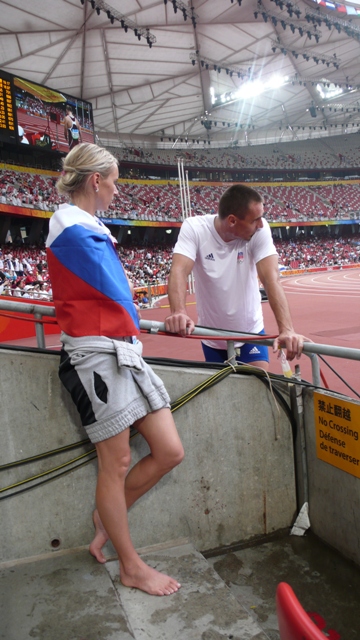 Roman Sebrle from the Czech Republic competing against Hans and Frederic. He is currently the Decathlon World (Gotzis Austria 2001) and Olympic (Athens 2004) Record holder. 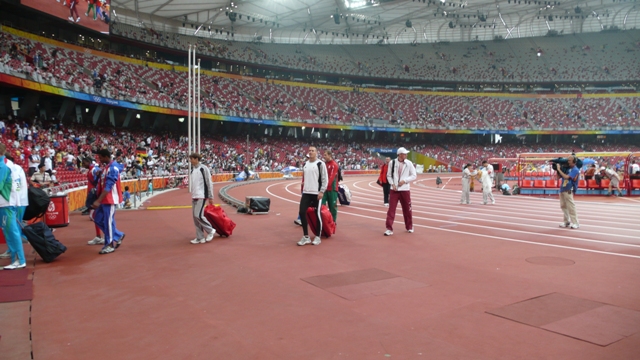 Tomorrow another day, another set of Tests for the Decathlon. 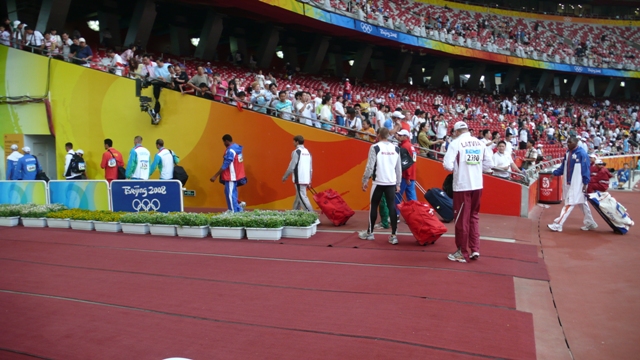