My very first in a personal series of "Brabant minus 1 day micro-treks" documenting short walks in the surrounding region of the low lands. Unfortunately I am living far away from Ontario's magnificent Algonquin or Alaska's wild open Danali Natural Park - where it would be tricky to pursue a career in IT anyway - but tiny green patches persist in Belgium's urban sprawl.

The name "Brabant" itself refers to the original dutchy founded in the 13th century in the West of the Holy Roman Empire, roughly spanning an area between de rivers Schelde and the Dijle. It is derived from Braecbant, which is a combination of "braec" (meaning "broek" which is an ancient word for "swamp land") and "bant" (simply meaning "region"). Today its historical name persist in the names of the provinces North-Barbant in the Netherlands, and Flemish and Walloon Branant in Belgium. Due to my current residential position, I mainly focus on the valley of the Dijle, which is the Dutch-speaking area between the European/Belgian capital of Brussels, and university city of Leuven (where my daughter studies).

Today's walk is one of my favorites at the East of Brussels International Airport between Berg on the "Haachse Steenweg" in the North, and Erps-Kwerps on the Leuvense Steenweg in the South. It is pretty amazing insofar that you can cross forest, swamp and field in less than 4 hours, with airplanes taking off and landing overhead. The entire route encompasses 12 kilometers on flat terrain - so it can be accomplished in 4 hours - but mud and snow in Autumn, Winter and Spring will surely slow you down considerably on the first leg of your journey. 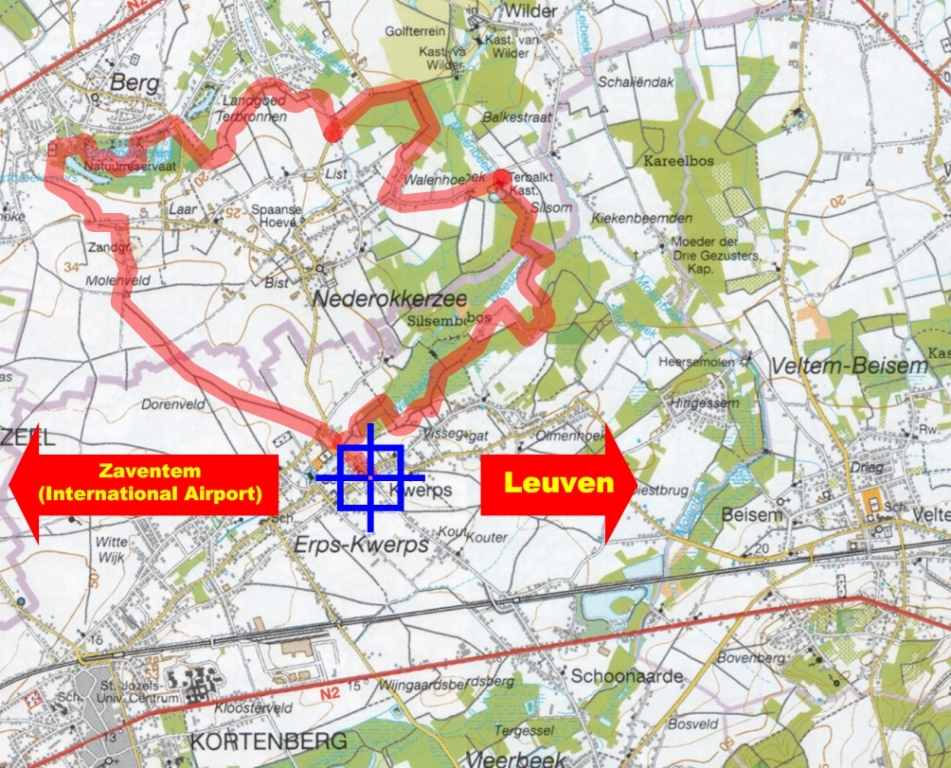 Source of the map: Paper edition of "Topografische Atlas België" at a scale of 1:50.000 published by the NGI ("Nationaal Geografisch Instutuut"). Two different maps were digitally stitched together, so the "L" at the end of "Nederokkerzeel" fell off.

Starting point is the church at the crossing of Sint-Pietersplein and the Kwerpsebaan in Erps-Kwerps with GPS coordinates 50° 54.3' N 004° 34.1' E. Curiously the tiny township of Erps-Kwerps counts 2 catholic churches, so in the darkness I already twice made the mistaking aiming for the illuminated tower in the West. Luckily they are only 750 meters distance from each other, but at first it seriously challenges your navigational skills. 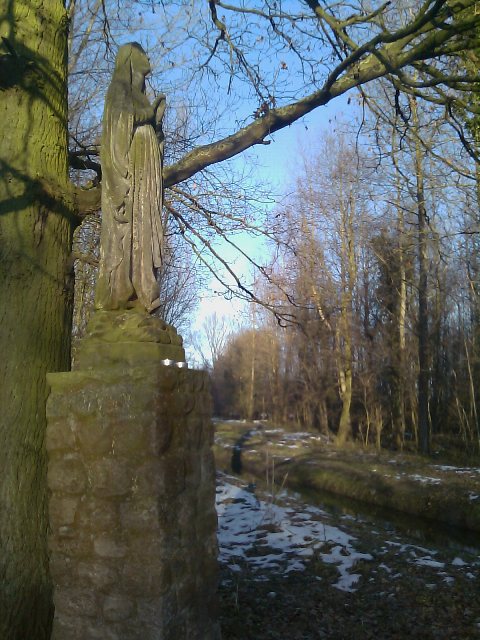 Virin Maria is omnipresent in Brabant. Over here she is contemplating the (exceptionally) blue skies above the "Molenbeek".

Follow the street direction North-West. After about 250 metres, a hardly visable road between houses bearing 40° will take you along the Wiesbeek into Silsembos. Throughout the forest there are elevated post in the trees from which ornithologists can observe birdlife in the early and late hours. The more you move Eastbound, the wetter the terrain will become, up to the point that you hit the Molenbeek, which you can't cross unless you fancy a swim. When jumping smaller ditches, you can follow the Molenbeek Northbound, ending in the backyard of Kasteel Terbalkt. Presumably it is privately owned, but I always got through to join the road West along the "Walenhoek". 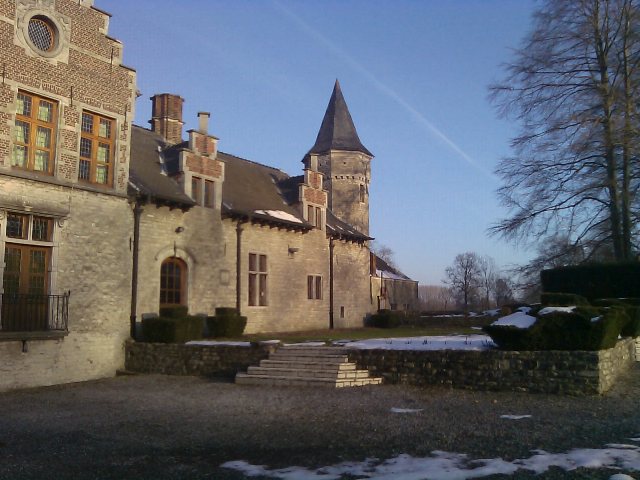 Backyard of Castle "Terbalkt". Something tells me that people living here are not living off social welfare.

Via smaller trails (a topographical map and a good compass are indispensable to get off the roads), you will cross "Landgoed Terbronnen" and the "Kortbroekvijvers", the latter being a true swamp habitat. Torfbroek is preserved by "Natuurpunt", who organises guided tours every 1st Sunday from April to October at 9:30 (call caretakers Michel Janssens 016-65.90.93 or Jan WOuters 02-361.15.97). The path South of the pond is only accessible outside the bird breeding season). Over here the walk runs parallel with the "Laar en List" trail of 8,5 km near Kampenhout, which is documented in "Op stap in Vlaams-Brabant: Noord-Dijleland published by Province of Flemish-Brabant" published by the Tourist Bureau of the Province of Flemish Brabant. 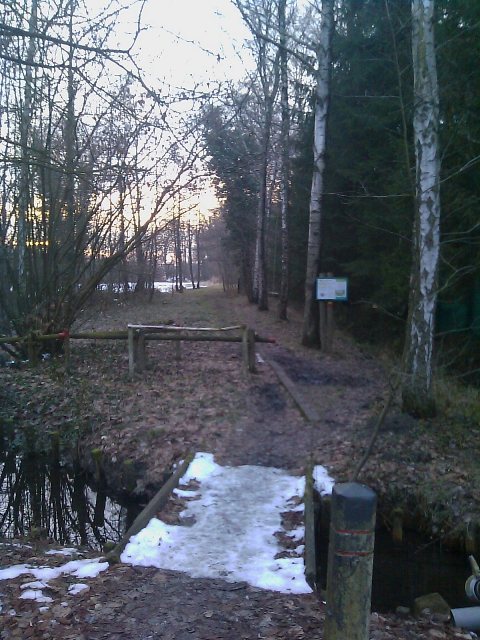 At the very West of the Kortebroekvijvers (when arriving at a soccer field) you turn South-East to return to Erps-Kwerps. On the way you will pass the old sandpit at Molenveld, from which you can spot the churches at approximately 3 kilometers distance. To Brabant norms this is quite an extended stretch of field, which is also great for running or walking the dogs in Summer. 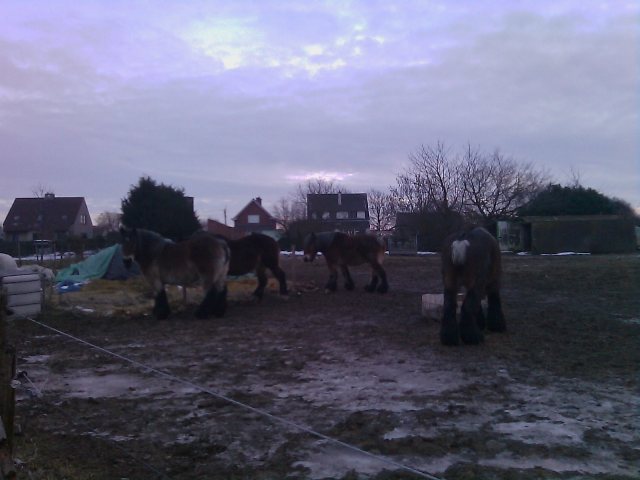 The "Brabançon" or Belgian Heavy Horse, which is the pride of Brabant.