With my daughter Nicole away for 2 months in Canada, and 2 weeks summer holiday dedicated to refurbish the entire 1st floor and part of the attic, my wife Shanshan and I decided to indulge ourselves in a 3-day trip to Rome, following the footsteps of Audrey Hepburn and Gregory Peck in a "Roman Holiday". Before I heard a lot of bad stories of the classic city - food no good, dirty, etc ... - in fact absolute rubbish, since it turned out to be still one of the great cities of all time. 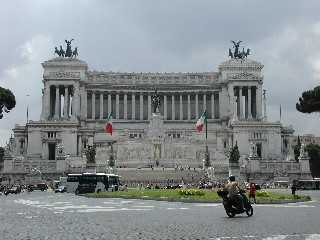 Arrived Stazione Termini, after slurping a Cappucino on the Via Nazionale, we embarked on the "fountain walk" throught the Rome of Bernini, passing Quattro Fontane, Piazza Del Quirinale, the Trevi Fountain, to finally arrive at Il Vittoriano (a.k.a. the "typewriter"). From there we walked through the ancient forum to the Colloseo, where we let ourselves be carried away by stories of the gladiators. At night we went to join the masses at the Circo Massimo to support the Italian against the French team in the world up soccer. The crowds went wild once Zidane got send off with a red card after kicking Materazzi, during the penalty shoot-outs everyone's heart skipped a few beats, but after then Italy became ... campione del mundoooo ... the fever stayed until long after we left the City. Walking back via the Piazza Venezia we saw people swimming in the Trevi fountain, and guys falling utterly drunk off their Vespa's. 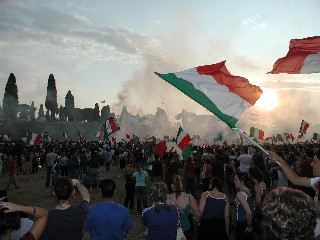 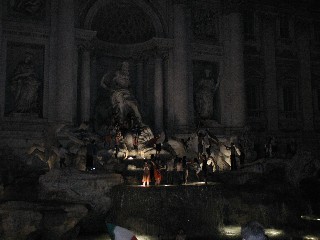 Visited the Vatican Museum and Saint Pieter, amazing the amount of wealth the popes have been able to accumulate over centuries. As a philosopher faced one of my favourites, i.e. School of Athens of Raphaël, but met rest of history as well, such as the Sistine Chapple, the Sanza, etc ... After another queue mounted the Coppola for an amazing view over Rome and the Tiber. In the evening ate the best carpaccio pesca ever at Tullio, Via S. Nicola da Tolentino 26, Roma. 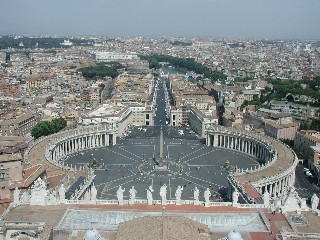 Down the Spanish Steps through the mundane Via Condotti, walked along the Tiber to Walk Tibel to Castel Sant' Angelo. Via Campo de Fiori and the Via Del Pellegrino, we went up the Capitol to the Palazzo dei Conservatori, to visit the Luppa with Romulus and Remus. After lunch overseeing the Market of Trajanus, we went on a shopping spree, buying myself 3 Versace and 1 Valentino ties + Geox leather-soled business shoes. After all not a bad conquest for 3 relatively short days ... 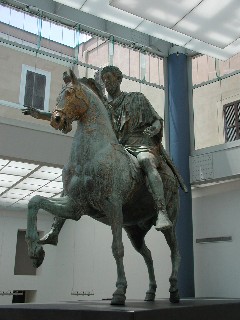